Water and air, the two essential fluids on which all life depends, have become global garbage cans.

Ground water is an almost ubiquitous source of generally high-quality fresh water. These characteristics promote its widespread development, which can be scaled and local­ized to demand, obviating the need for substantial infrastructure. Globally, ground water is the source of one third of all fresh­water withdrawals, supplying an estimated 36%, 42% and 27% of the water used for domestic, agricultural and industrial pur­poses, respectively. In many environments, natural groundwater discharges sustain baseflow to rivers, lakes and wetlands during periods of low or no rainfall.

Influence of climate on groundwater systems

Direct impacts. Natural replenishment of ground water occurs from both diffuse rain-fed recharge and focused recharge via leak­age from surface waters (that is, ephemeral streams, wetlands or lakes) and is highly dependent on prevailing climate as well as on land cover and underlying geology. Climate and land cover largely determine precipitation and evapotranspiration, whereas the underlying soil and geology (Fig. 1) dictate whether a water surplus (precipitation minus evapotranspiration) can be transmit­ted and stored in the subsurface. Modelled estimates of diffuse recharge globally range from 13,000 to 15,000 km3 yr−1, equiva­lent to ~30% of the world’s renewable freshwater resources or a mean per capita groundwater recharge of 2,100 to 2,500 m3 yr−1. These estimates represent potential recharge fluxes as they are based on a water surplus rather than measured contributions to aquifers. Furthermore, these modelled global recharge fluxes do not include focused recharge, which, in semi-arid environments, can be substantial. Over time, recharge is strongly influenced by climate variability — including climate extremes (droughts and floods) that are often related to modes of climate variability such as the El Niño/Southern Oscillation (ENSO) at multiyear timescales and the Pacific Decadal Oscillation, Atlantic Multidecadal Oscillation (AMO) and others at longer timescales. During the recent multi-annual Millennium Drought in Australia, groundwater storage in the Murray–Darling basin declined sub­stantially and continuously by ~100 ± 35 km3 from 2000 to 2007 in response to a sharp reduction in recharge. In tropical Africa, heavy rainfall has been found to contribute disproportionately to recharge observed in borehole hydrographs. Recharge in semi-arid environments is often restricted to statistically extreme (heavy) rainfall that commonly generates focused recharge beneath ephemeral surface water bodies. Recharge from heavy rain­fall events is also associated with microbial contamination of shal­low groundwater-fed water supplies and outbreaks of diarrhoeal diseases in both low- and high-income countries. Wetter condi­tions do not, however, always produce more groundwater recharge. Incidences of greater (×2.5) winter precipitation in the southwest United States during ENSO years give rise to enhanced evapotran­spiration from desert blooms that largely or entirely consume the water surplus. At high latitudes and elevations, global warming changes the spatial and temporal distribution of snow and ice. Warming results in less snow accumulation and earlier melting of snow, as well as in more winter precipitation in the form of rain and an increased frequency of rain-on-snow events. The aggregate impact of these effects on recharge is not well resolved, but preliminary evidence indicates that changes in snowmelt regimes tend to reduce the sea­sonal duration and magnitude of recharge. The effects of receding alpine glaciers on ground­water systems are also not well understood, yet the long-term loss of glacial storage is estimated to reduce similarly summer baseflow.

Human and indirect climate impacts. Links between climate and ground water in the modern era are complicated by LUC, which includes, most pervasively, the expansion of rain-fed and irrigated agriculture. Managed agro-ecosystems do not respond to changes in precipitation in the same manner as natural ecosystems. Indeed, LUC may exert a stronger influence on terrestrial hydrology than climate change. During multi-decadal droughts in the West African Sahel in the latter half of the twentieth century, groundwa­ter recharge and storage rose rather than declined owing to a coin­cidental LUC from savannah to cropland that increased surface runoff through soil crusting and focused recharge via ephemeral ponds. Much earlier in the twentieth century, LUC from natu­ral ecosystems to rain-fed cropland in southeast Australia and the southwest United States similarly increased groundwater storage through increased recharge, but also degraded groundwater qual­ity through the mobilization of salinity accumulated in unsatu­rated soil profiles14. In both regions, recharge rates under cropland increased by one to two orders of magnitude37–39 compared with native perennial vegetation. Humans have also had large-scale impacts on the terrestrial water system through irrigation. In 2000, irrigation accounted for ~70% of global freshwater withdrawals and ~90% of consumptive water use. Gravity Recovery and Climate Experiment (GRACE) satellite data and ground-based observations revealed that groundwater storage declined by between 24 and 31 km3, a volume that is equivalent to the storage capacity of Lake Mead, the largest surface reservoir in the United States. Thus, the indi­rect effects of climate on ground water through changes in irriga­tion demand and sources can be greater than the direct impacts of climate on recharge.

Future climate impacts on groundwater systems. As irrigation dominates current groundwater use and depletion, the effects of future climate variability and change on ground water may be great­est through indirect effects on irrigation-water demand. Substantial uncertainty persists about the impacts of climate change on mean precipitation from general circulation models (GCMs), but there is much greater consensus on changes in precipitation and tem­perature extremes, which are projected to increase with intensifica­tion of the global hydrological system. Longer droughts may be interspersed with more frequent and intense rainfall events. These changes in climate may affect ground water initially and primar­ily through changes in irrigation demand, in addition to changes in recharge and discharge. A global analysis of the effects of climate change on irrigation demand suggests that two thirds of the irri­gated area in 1995 will be subjected to increased water requirements for irrigation by 2070. Projected increases in irrigation demand in southern Europe will serve to stress limited groundwater resources further. Persistent droughts projected in the California Central Valley over the latter half of the twenty-first century may trigger a shift from a predominantly surface-water to a predomi­nantly groundwater supply for agriculture. Increased groundwater abstraction combined with reduced surface-water flows associated with intermittent droughts during the first half of the twenty-first century may, however, induce secondary effects (for example, land subsidence) that severely constrain this future adaptation strategy. Projections of the direct impacts of climate change on ground­water systems are highly uncertain. The dominant source of uncertainty lies in climate projections derived from GCMs, which typically translate the same emissions scenarios into very different climate scenarios, particularly for precipitation. Nevertheless, GCM projections of global precipitation for the twenty-first cen­tury broadly indicate a ‘rich get richer’ pattern in which regions of moisture convergence (or divergence) are expected to experience increased (or decreased) precipitation. 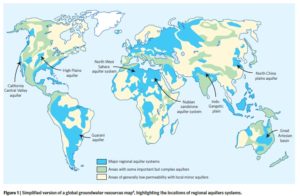 Ground water can enhance the resilience of domestic, agricultural and industrial uses of fresh water in the face of climate variability and change. As the only perennial source of fresh water in many regions, ground water is of vital importance to the water security of many communities, including — most critically — rural dwell­ers in low-income countries. Groundwater-fed irrigation provides a buffer against climate extremes and is consequently essential to global food security. Furthermore, it alleviates poverty in low-income countries by reducing crop failure and increasing yields. The value of ground water is expected to increase in coming dec­ades as temporal variabilities in precipitation, soil moisture and surface water are projected to increase under more frequent and intense climate extremes associated with climate change. Indeed, in light of the resilience of groundwater resources to hydrological extremes, ground water could have a strategic role in sustaining drinking-water supplies under emergency conditions. Comprehensive management approaches to water resources that integrate ground water and surface water may greatly reduce human vulnerability to climate extremes and change, and promote global water and food security. Conjunctive uses of ground water and surface water that use surface water for irrigation and water supply during wet periods, and ground water during drought, are likely to prove essential.

How Can We Avoid A Situation Like The Cape Town...

The Link Between Climate Change & Water

How our waste winds up in places like Malaysia and...

California as an Example for Managing Urban Water in Drought...

Laudato si', mi' Signore  Praise be to you, my Lord

In the words of this beautiful canticle, Saint Francis of Assisi reminds us that our common home is like a sister with whom we share our life and a beautiful mother who opens her arms to embrace us. “Praise be to you, my Lord, through our Sister, Mother Earth, who sustains and governs us, and who produces various fruit with coloured flowers and herbs