Recently, in an article published on Nature Communications, Dr. Ostle et al. has presented evidences of the rise in ocean plastics is due to the rise of plastic production.

Only we humans make waste that nature can’t digest.

Plastic production has increased exponentially since its use became widespread in the 1950s. This has led to increased concern as plastics have become prevalent in the oceanic environment, and evidence of their impacts on marine organisms and human health has been highlighted. Despite their prevalence, very few long-term (>40 years) records of the distribution and temporal trends of plastics in the world’s oceans exist. In the article the authors present a new time series, from 1957 to 2016 and covering over 6.5 million nautical miles, based on records of when plastics have become entangled on a towed marine sampler. This consistent time series provides some of the earliest records of plastic entanglement, and is the first to confirm a significant increase in open ocean plastics in recent decades.

Plastics have become a global concern as the accumulation in the world’s oceans has become apparent, and potential health risks have been highlighted. The use of man-made material for producing netting and fishing products became widespread in the 1950s, when these slow-degrading materials were made readily available and affordable. Since this period, there has been a rapid increase in plastic production for a wide range of uses, and a number of environmental impacts have been highlighted. Due to their very slow degradation periods, plastics have become ubiquitous and have been associated with marine health impacts such as entanglement, ingestion, the potential dispersal of invasive species and toxicity, and contamination through trophic levels.

The authors present a consistent time series from 1957 to 2016, of oceanic plastic occurrence in the North Atlantic and adjacent seas, and their findings on the localization, properties, and temporal trends of these plastics. This dataset presents some of the earliest records of open ocean plastic entanglement, and confirms a significant increase in open ocean plastics since the 1990s.

Their findings are the first to confirm the expected significant increase in plastics in the open ocean since the 1990s. Researchers have presented a significant increase in macroplastics from 1957 to 2016 (Fig. 1), which agrees with the exponential increase in total plastic production worldwide. It has been suggested that there may be a sink of plastic items within global oceans, which could have led to reduced estimates of sea surface plastics and have implications for plastic pollution.

As the global population continues to increase, plastic waste will continue to grow. The realisation that plastics are ubiquitous, and that the consequent health impacts are yet to be fully understood, has increased the awareness surrounding plastics. Plastics are likely to be used as an indicator of marine health in environmental monitoring to drive policy (e.g. the Marine Strategy Framework Directive). However, progression to reduce the inputs of plastic into the ocean is required. There is a need for re-education, continued research and awareness campaigns, in order to drive action from the individual as well as large-scale decisions on waste-management and product design. 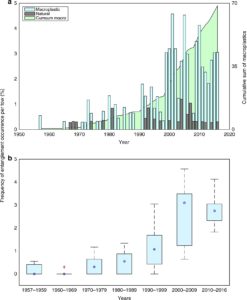 Reevaluating environmental reserves to free up capital and drive sustainability

3 ways the circular economy is vital for the energy...

5 ways our lives would improve in a circular economy

The Swedish Embassy and businesses proposed circular economy to Vietnam

Laudato si', mi' Signore  Praise be to you, my Lord

In the words of this beautiful canticle, Saint Francis of Assisi reminds us that our common home is like a sister with whom we share our life and a beautiful mother who opens her arms to embrace us. “Praise be to you, my Lord, through our Sister, Mother Earth, who sustains and governs us, and who produces various fruit with coloured flowers and herbs